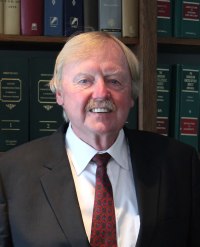 Paul was born in England and raised in Montreal. He attended Queen’s University for both his undergraduate and law degrees and played varsity basketball throughout his time at Queens.

He was called to the bar in 1976 and, together with his wife Donna, moved to Smiths Falls where he started the firm, which was then known as McLean and Howard.

Paul has carried on a general practice throughout his career, most recently focusing on commercial and residential real estate, estates, land development, corporate and municipal law.

Paul has always been involved in the local community, volunteering with countless organizations, serving as a town councillor for eight years, and being involved with the Perth and Smiths Falls District Hospital in various leadership capacities from 1988 to 2014.

Paul and Donna raised three accomplished children in the Town of Smiths Falls, and they are now grandparents to an ever-growing brood. They travel extensively, while also taking time to enjoy various outdoor pursuits at home in Lanark County.

Our website provides general information on legal and related matters and should not be relied upon as legal advice. If you require legal advice, you should retain qualified legal professionals to advise you in the context of your particular circumstances.

If you would like to retain Howard Kelford & DuBois LLP to give you legal advice, please telephone, email or write to any of our lawyers, who will be pleased to discuss whether or not our firm can assist you.